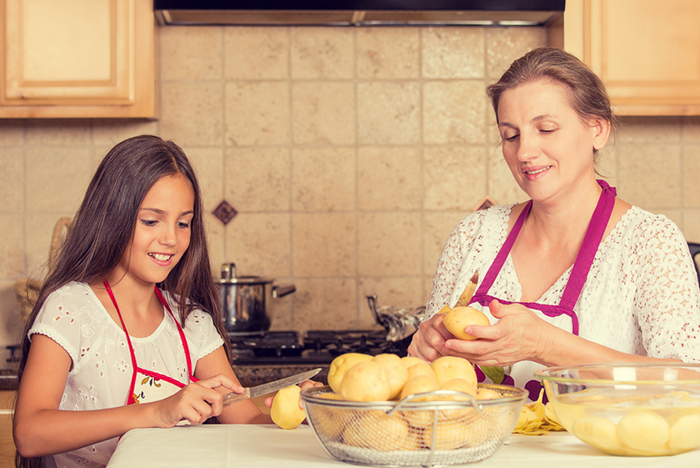 It happens all too often during your routine grocery shopping. You grab a bag of potatoes with big plans. You’re not sure what those plans are, but you’re going to Google them when you get home and turn those potatoes into magic. A week later, you realize that you still have the potatoes, and you’d better cook them before they go bad. So, you quickly dice, season, bake and serve, once again abandoning your quest for true greatness.

The time has come to stop being a hesi-tater! We’ve put together a set of potato dishes not only to inspire and delight, but to send you back to Pete’s Market with a plan-in-hand. No longer will your spuds sit in the dark, awaiting their fate as a last-ditch side dish. From now on, the potatoes you bring home will fulfill their destiny as the superstars of your dinner table.

But before we get started, check out this great potato peeling hack from DaveHax. It’ll come in handy as you start in on these great recipes!

Your waffle press is probably getting bored. Breakfast waffles for the kids might be a weekend treat, but your trusty little appliance is capable of so much more. One such example is the sweet potato waffle, a side dish that’s guaranteed to raise eyebrows at your next family meal. 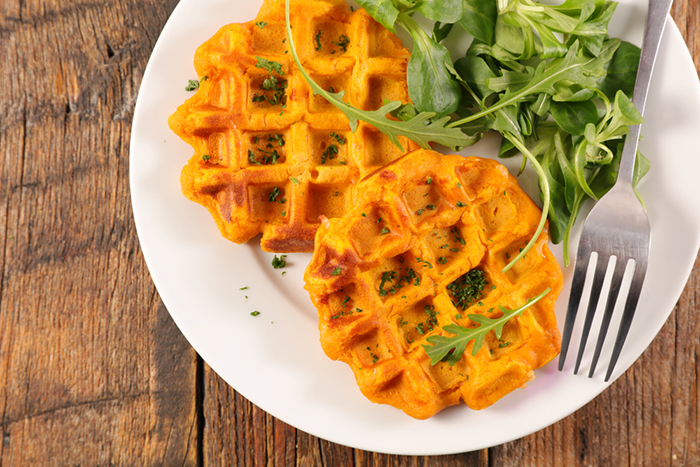 Peel and cube 1.5 cups of sweet potatoes, and steam for 20 minutes until tender. Mash potatoes and set aside.

Beat 6 eggs, or egg whites if you prefer, then slowly fold them into the batter. Cook batter with waffle iron, 5-6 mins (depending on your particular machine).

While you can certainly serve them for breakfast in the traditional way, sweet potato waffles also taste great for dinner! Try topping them with bacon bits, scallions, and your favorite creamy dressing.

Here’s another breakfast item that, once potatoes are added, can instantly become a dinner option. Essentially a frittata, the Spanish Omelet makes liberal use of potatoes and onions to create a hearty and satisfying dish. 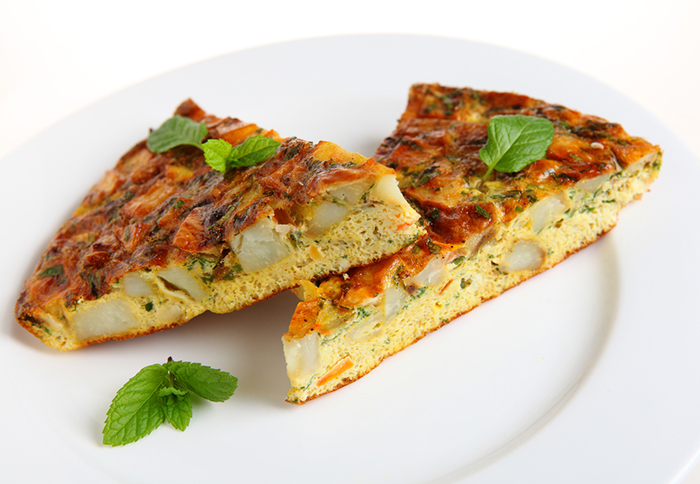 While thinly slicing ½ lb. of potatoes, heat a little olive oil on medium-high in a skillet. Season potatoes with salt and pepper, then cook until slightly browned.

Mix in 1 large, thinly sliced onion. As the onions soften, scramble 4 eggs, and season to taste. Pour into skillet with onions and potatoes, then mix.

Reduce heat and cook on low until bottom of omelet begins to brown. Flip the omelet and continue cooking until egg mixture firms up.  Serve warm with garnish of choice.

Sometimes the best recipes are the simplest ones. In this case, we have a soup that’s basically made from potatoes and leeks in a pressure cooker. It’s thick, delicious, and genuinely satisfying as a dinner unto itself. 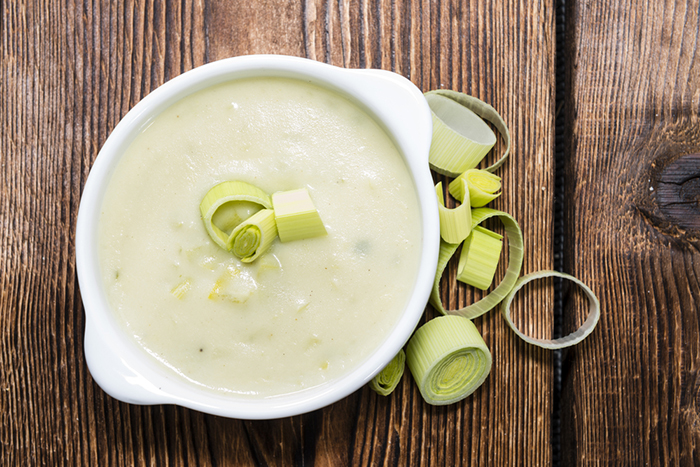 If you don’t have a pressure cooker, that’s ok. Just cook the soup on your range in a large pot. It’ll take longer, but it’s worth the wait.

These are not your kid’s tater tots. In point of fact, Potato Croquettes are the undisputed royal family of the tater tot kingdom. When prepared correctly, these luscious orbs of deliciousness provide the perfect potato experience: crispy exterior, creamy interior, and a savory taste that’s second to none. 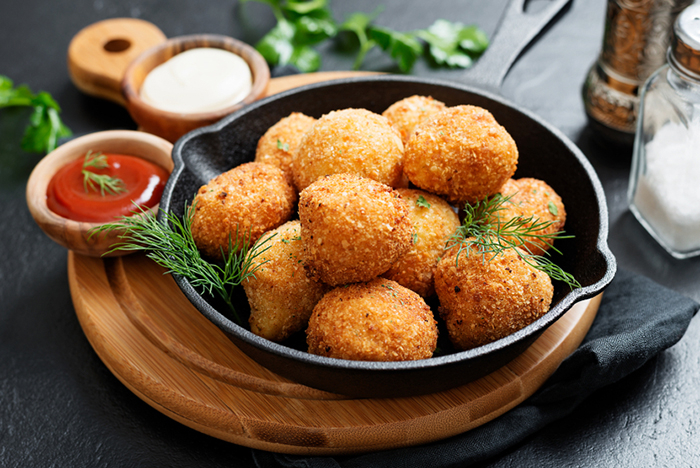 Peel 2 lb. of potatoes, cut each one into 4 pieces and bring to a boil starting in cold, salted water. Once the potatoes are fully cooked, drain the water, and mash them in a pan with ¼ cup of butter over low heat.

Remove from heat once mixture is smooth. Add ½ cup of shredded parmesan cheese, 1 egg yolk, and salt & pepper to taste. Throw in a dash of nutmeg for a little extra zest, and combine.
After the mixture has completely cooled, make the croquettes by rolling portions into approximately 2” balls. Roll each one into flour, a beaten egg, and breadcrumbs (in that order).

Fry the croquettes in boiling oil until crispy and golden. Blot off the excess grease and serve immediately with preferred garnish and condiments.

Blitva is commonly served with cooked baby squid as the main course. For adults with an adventurous palette, this combination will likely prove invigorating and deeply fulfilling. But before serving squid and blitva to your children, consider reading our blog post about motivating picky eaters.

Of the five potato dishes presented in this blog, Blitva is least likely to be embraced by your kids. But if you’re into heavy flavors and good nutrition, this Eastern European potato staple might just become your new obsession. 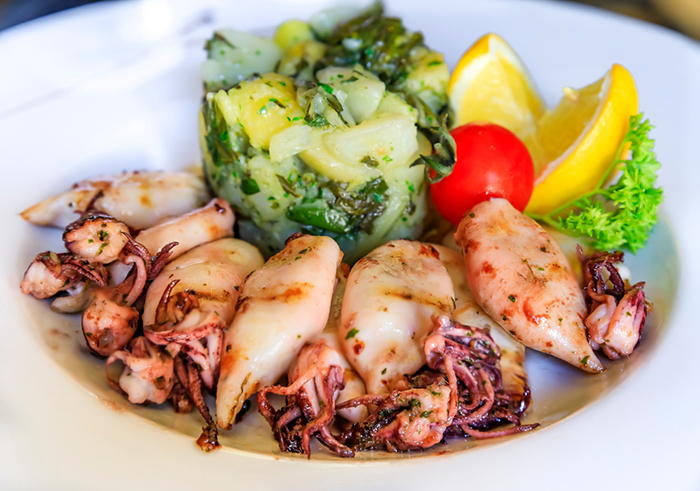 Peel, cube, and boil 4 medium potatoes in a pot of salted water. Rinse and trim 2 lbs. of chard, slicing into thin strips. Add chard to boiling potatoes when they are almost done, then cook together for another 10 minutes.

In a separate skillet, heat 2-3 tbsp of olive oil. Sauté 3 cloves of minced garlic in the hot oil for a couple of minutes. Drain the chard and potato mixture, then add to skillet. Cook with the oil and garlic for 2-3 minutes while stirring frequently. Salt and pepper to taste, and serve immediately.

Pete’s Market is on a mission to bring excitement back to your kitchen. Explore our produce, meat, and seafood sections for the gold standards, as well as exotic and unusual foods. The next time you’re visiting us and come across something unfamiliar, use your phone right then and there to search for related recipes. Take a chance and go for it – you may just discover a new favorite dish!
Categories:
Cooking